Real talk from an 18 year cop 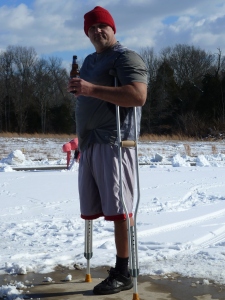 Well, here we are again, reflecting on this past year as amputees. For most of us, 2014 signified another twelve months where we were forced to use copious amounts of perseverance and mental toughness just to get through each passing day without actually killing someone for a stupid one-legged joke or persistent stare. Yes, if you are an amputee and reading this blog from the comfort of your home, and without an ankle bracelet that you did not get for Christmas, congratulate yourself on refraining from criminal acts that would have landed you in a prison cell with Bubba. No offense if your name is actually Bubba but I have never met an amputee named Bubba so I thought it would be safe! Anyway, in good amputee fashion, we all got stares from people throughout the year I’m sure! Just a part of life. So congrats! And if this is your first year of membership in the Amputee Club of America, which usually does not require anything to re-enroll for 2015, take great pride in knowing that you are truly a part of a minority that only numbers less than 2 million people nationwide according to the Amputee Coalition. (If you are not aware of this organization, it would behoove you to take a minute to check out their website.) As amputees, we are very important to the rest of the country. It only takes an evening of watching television to find another inspiring story of an amputee who beat the odds. You see, an amputee’s story of perseverance is one of the most motivational tales around. Whether its one of an Olympic athlete or a dancer or a soldier returning from war, or you and I, we exist to show the world how to never let life win during our short time among the living. Furthermore, I truly believe God only selects those who are strong enough to endure great pain to be examples of never quitting. Like it or not, we have been chosen, so unless you can make your leg or arm somehow miraculously grow back, which I will pay dearly for if you have the secret, embrace your position and show the world how kick-ass you really are! Personally I think 2014 was awesome and encouraging for amputees as we became more accepted in society. Not to mention all the cool technology and cosmetic leg wraps and exoskeletons that are hitting the market! I do plan on customizing my prosthetic leg sometime this year with something crazy looking!

Other than that, my year was great! My kids stayed healthy, I still had food on the table and my dog still pooped outside most of the time. What more could I ask for? I did hit a hospital stay this past December for about a week due to complications with a staph infection, but after fighting that and MRSA and going through a total of 40 surgeries during my past, I’m not complaining. I plan to make this year even better than the last. I hope you do too. In closing, my new quote for the year is this, A goal without a plan is simple a wish. If you have a goal, make a plan and you will find success. I hope all of you a great 2015 and thank you for enjoying my blog. Please take the time to share it with new amputees along the way. Until the next one,